About the Way from Inspiration to a Designerjacket

Wolfgang Langeder from the Austrian company Utope is a professional designer, who created the Manta Color Morph Jacket by polychromelab. Last week in part 1 of the interview he talked about his vision of creating a new kind of innovation. This week we dare to take a look deeper inside the designer’s mind.

Maximilian Frey: Why did you use polychromelab’s fabric for the Manta jacket? What did the fabric tell you holding it in your hands the first time?

Wolfgang Langeder: I find this purely functional side of polychromelabs’s fabric very interesting. This fabric is something highly innovative, and basically it is technology that makes the innovation. This agrees very well with my vision for Utope.

“I like the strong connection between polychromelab and nature, and the authenticity that originates right in the life of Lisa and Michele.”

Maximilian Frey: If you like to share your secret with us, were did you get your inspiration? Did polychromelab play a part in your decision?

Wolfgang Langeder: I like the strong connection between polychromelab and nature, and the authenticity that originates right in the life of Lisa and Michele. It was really important to me that the Manta Color Morph Jacket‘s design makes a connection to this and smoothly fits in the overall image of polychromelab.

Maximilian Frey: When you look back on designing this piece of art and on the moment you first saw the prototype, did your eyes glow?

Wolfgang Langeder: When you work on a design, you’re really “close” to the product itself and its details, and you recognise that everything fits together more unconciously. In the final phase then for the first time you have the chance to see the prototype from some distance, and I am glad that the Manta Color Morph Jacket had become such a strong and interesting piece.

Maximilian Frey: Design and fabric, interacting perfectly well. Manta Color Morph embodies the perfection of functionality and elegance. But what should we do with this? Where should we wear this special jacket?

Wolfgang Langeder: I guess that primarily there are situations in the extreme or outdoor range of use when customers wear this jacket. But additionally this jacket is a “style item”, which means that this jacket also could be worn only because of its elegance instead of its functionality.

Maximilian Frey: And what is it that one by any circumstances must not do with the Manta? When would your heart begin to hurt?

Wolfgang Langeder: I am a pragmatist, so I think the purpose of apparel is that it should be worn. Basically everyone should do everything he wants to do with the jacket. 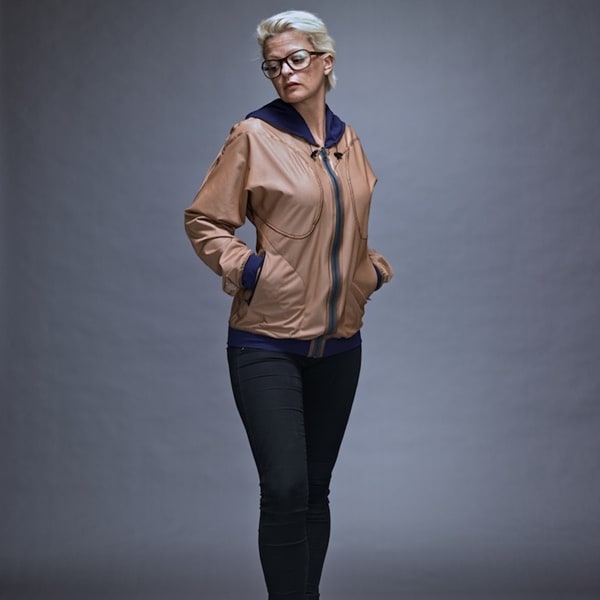 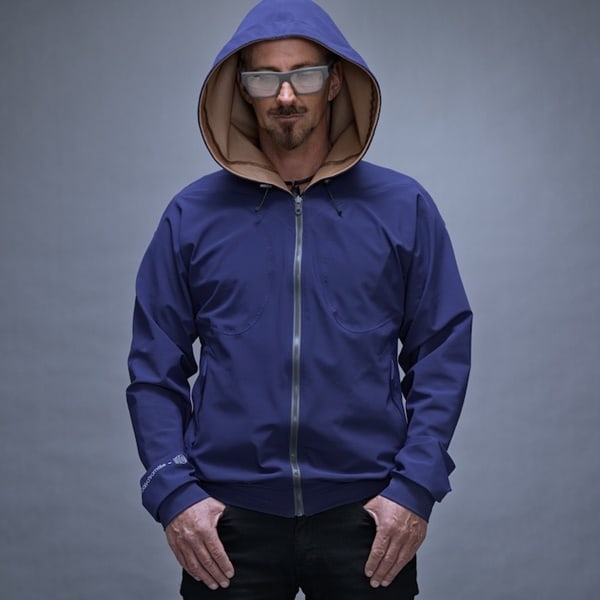 About a Vision to Create a New Kind of Innovation

Wolfgang Langeder from the Austrian company Utope is a professional designer, who created the Manta Color Morph Jacket by polychromelab. I met the visionary and textilie-virtuoso for an interview.

Maximilian Frey: Wolfgang, for everybody who doesn’t know you yet, can you explain what Utope is about?

Wolfgang Langeder: We at Utope want to create a new kind of innovation, something that hasn’t been developed yet. For this we integrate innovative technologies in textiles, that up to now only were components for digital devices, so new kinds of functions and applications for apparel become reality.

Maximilian Frey: How is this even possible, technologies in textiles? You and your team are trying to connect apparel to smartphones. Hopefully one doesn’t has to charge his jacket every evening, does he?

Wolfgang Langeder: No, the jackets doesn’t have to be charged on a daily basis. Our concept is quite different. We use sensors integrated in the jacket measuring specific data (of both body and environment) which are transmitted to the smartphone, processed and made available for use by an app. Because both wearer and apparel are in permanent movement, we work with stretchable electronics which are a basic requirement for integrating technology in apparel. This concept is washable and appropriately safe.

“It’s about essential applications, which occur in nature for adapting to the environment optimally.”

Maximilian Frey: If you look at the Sporty Supaheroe Jacket, you’ll notice that Wolfgang Langeder wants to tell a story with his designs. What’s the story behind the Manta Color Morph Jacket?

Wolfgang Langeder: The story behind the Manta Color Morph Jacket is about the connection of technology and nature. This is the very thing I wish to make transparent to the wearer. If you look at the jacket’s fabric, it’s a hightech textile capable of warming and cooling. These are essential applications, which occur in nature for adapting to the environment optimally.

Additionally, the fabric also has two different sides, which brought me on the trace of an animal which characteristics, because of its elegant and dynamic appaerance, I wanted to “translate” into design. It’s the manta ray. This way a synthesis was made to combine my design vocabulary with the fabric’s hightech functionality. Men become part of the interaction between technology and nature, men become the link between these two parts, you can feel and experience wearing the jacket. 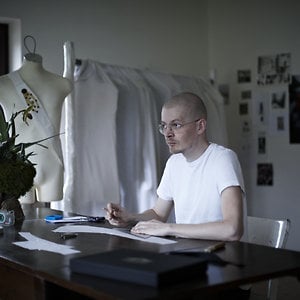